Worries about concussions have sent children to teams that don’t tackle; growth for NFL Flag

The American Academy of Pediatrics is recommending to expand non-tackling leagues so kids can play football without one of its most dangerous downsides. Enter flag football. WSJ’s Rachel Bachman joins Lunch Break. Photo: Infinite Impact

Cliff Ward Jr. is a self-described football nut. The Hebron, Ohio, resident first played football in third grade. His father was a high-school football star. But his 9-year-old son, Ty, is playing something different—flag football, on a local YMCA team.

Mr. Ward, concerned about concussions and their long-term effects, is keeping Ty out of tackle football until age 12 or 13.

“With flag football, you can still learn the basic fundamentals, learn the sport and learn to be part of a team,” says Mr. Ward, who works at a golf course. “Tackle will be there when you’re ready.” 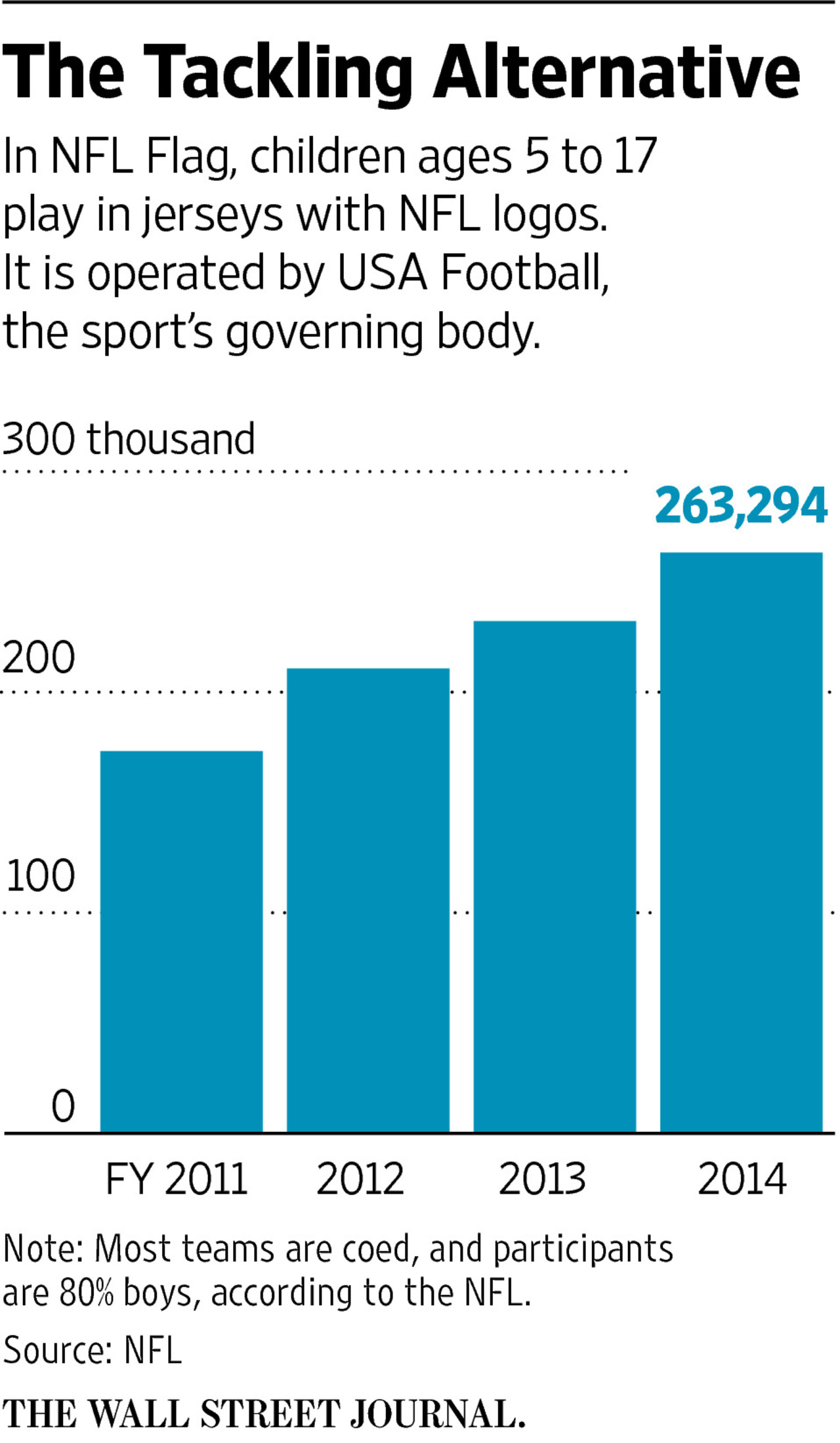 Parents nationwide facing the question of when or whether to let their child play tackle football are finding refuge in flag football. In this sport, players pull a detachable fabric strip, or flag, attached to the hips of opposing players, rather than tackling them.

The American Academy of Pediatrics recently recommended expanding non-tackling leagues as a way to limit exposure to collisions. Two University of Minnesota physicians go further in an editorial to be published in the American Journal of Bioethics early in 2016, saying public schools should end tackle football programs because of the sport’s concussion risks.

The fastest-growing flag football leagues are slicker and better organized than previous ones, parents say. The largest carries the cachet of the National Football League. 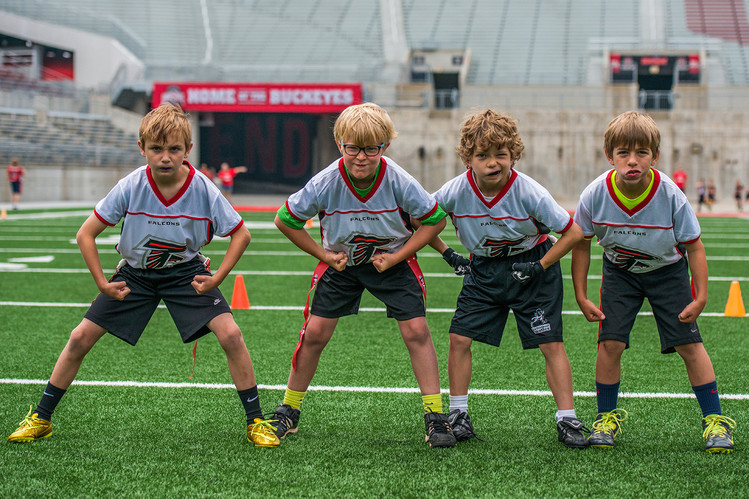 Flag Football Fanatics offer programs for children as young a preschool-aged. Its varsity level is for sixth- and seventh-graders.Photo:Infinite Impact

The Sports and Fitness Industry Association tracks a 5% rise among 13-to-17-year-olds and a slip among younger children: Participation in flag football nationwide for children ages 6 to 12 was down 6% in 2014 from 2013.

NFL Flag is coed but made up of about 80% boys, according to the NFL. It is operated by USA Football, the sport’s national governing body.

Players wear the logos and names of actual NFL teams. Most of the flag football teams are more casual than competitive, but the program crowns national champions near the site of the actual Super Bowl days before the big game.

Flag football is the most popular sport for Riverview, Fla.-based i9 Sports, though soccer, basketball and T-ball are catching up. The youth-sports company has franchise locations in 27 states. 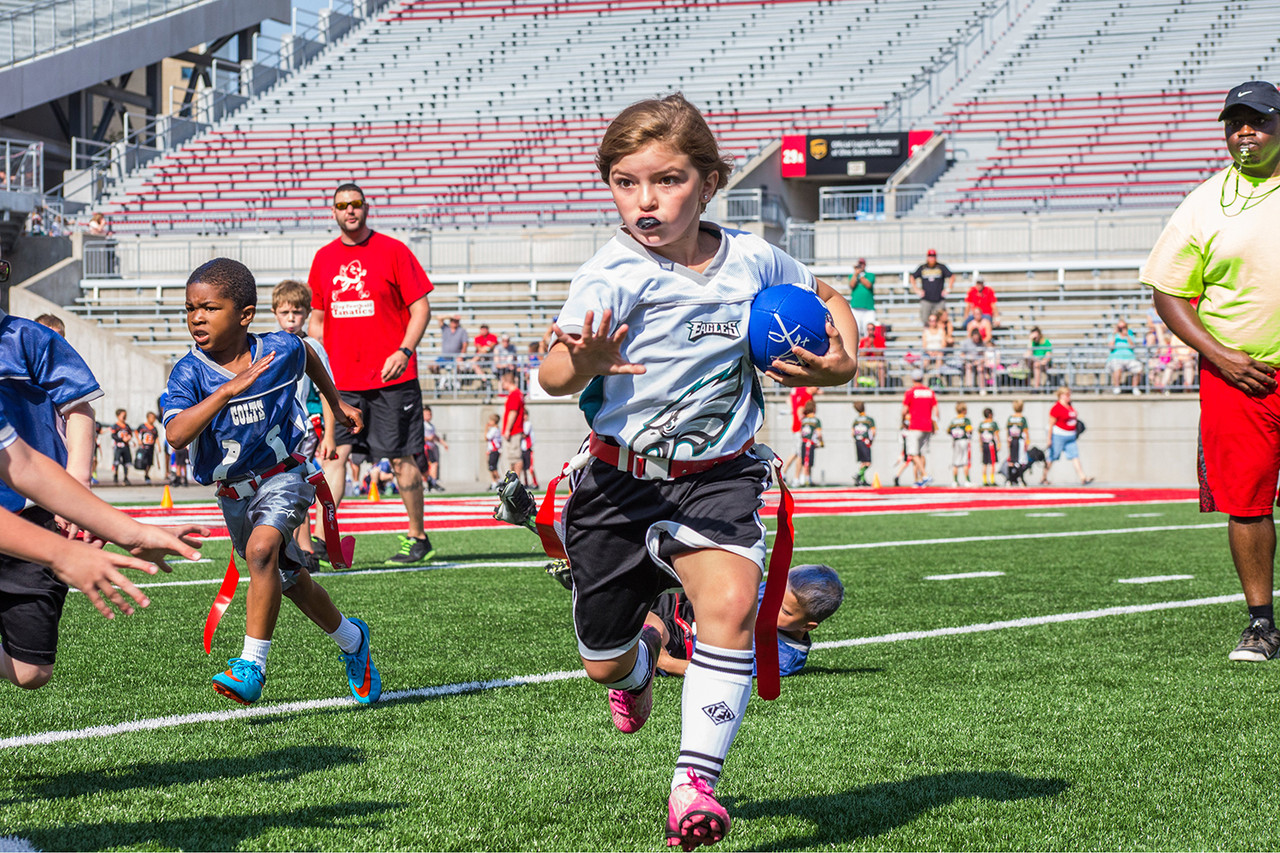 NFL Flag is coed, and about 20% of the participants nationwide are girls, according to the NFL. These Flag Football Fanatics players were participating in a game for second- and third-graders.

“People are finding out that there is an alternative to the hypercompetitive, hyperpolitical leagues,” says Brian Sanders, i9 Sports president and chief operating officer. “We teach good sportsmanship.”

Both the NFL-affiliated program and i9’s require only a one-day-a-week investment, typically a short practice followed by a game. That is a difference for families used to practices several evenings a week and games that can take up much of the weekend.

Flag football has smaller squads, with five or six players on a side instead of the 11 usually needed for tackle football. It also uses a smaller field, often 60-70 yards long rather than 100, and limited equipment: no helmets or pads. The main playing seasons are spring and fall.

“These 7- and 8-year-olds, you’re teaching them the game of football, but in a non-intimidating way,” says Andy Mignery, a volunteer coach for an NFL-affiliated flag football league in Ann Arbor, Mich. 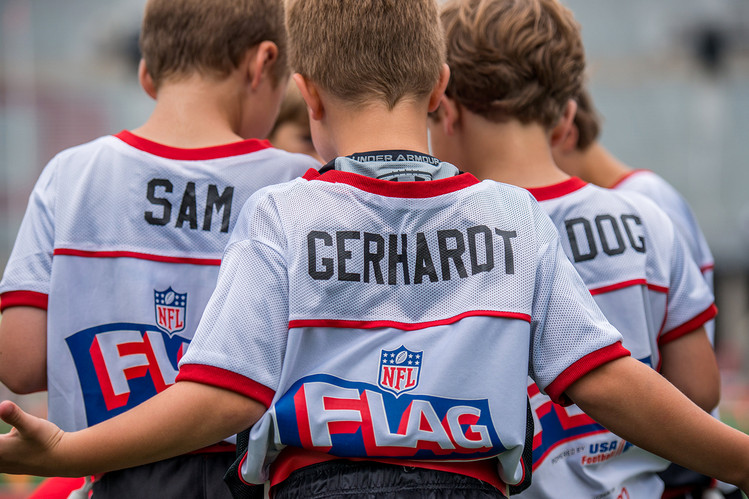 Many children like wearing the logos of the NFL teams they see on TV.

A former tight end for the University of Michigan, Mr. Mignery now coaches his 8-year-old son, Devin, on a high-school field within sight of his alma mater’s 110,000-seat football stadium. He says he gives the children laminated cards with plays on them, like professionals use, and he rotates players through so they get to try every position.

Flag football strikes a good balance for parents and children, he says. “One of my biggest fears from a parenting aspect is kids getting burned out on one sport. There’s a lot of sports where you’re traveling all the time, staying in hotels. It’s very demanding on a family.”

Jodie Worrell’s 9-year-old son, Jason, has played flag football for three years in a league affiliated with an Atlanta private school. The family watches the Atlanta Falcons and University of Georgia Bulldogs on TV, and she says that like many children, Jason “thinks he’s going to grow up and be a football player.”

About 64% of high-school football concussions occur when an athlete is tackling or being tackled, according to studies cited by the American Academy of Pediatrics. A poll last year showed that half of Americans don’t want their sons playing football. 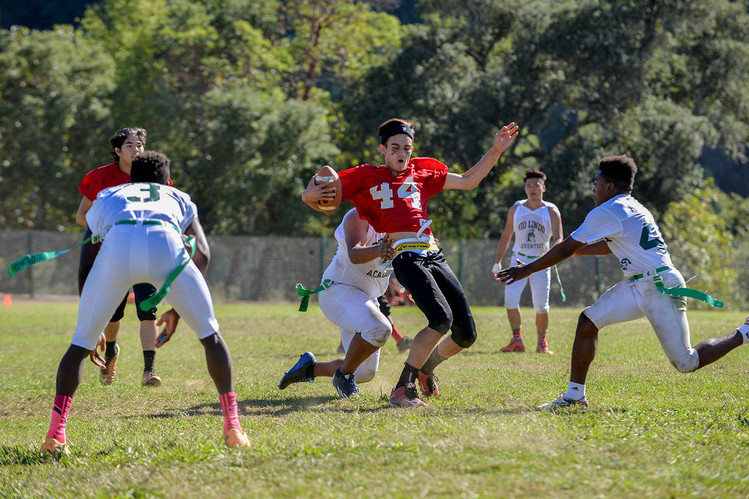 Flag football is growing at charter and private schools, such as Sacramento Adventist Academy in California. Fewer than 900 boys nationwide played on high school teams last school year, but that number has nearly tripled since 2010.

Flag football has been growing in popularity among high-school girls for years, particularly in Florida, the only state that offers an official state championship. About 6,600 girls in Florida, and 9,000 nationwide, play on high-school teams.

Parents at Sacramento Country Day School gave athletic director Matt Vargo “pretty much almost unanimously a ‘no’ for safety reasons,” when he asked if the school should start a tackle football program.

Some tackle-football leagues see flag football as a threat, says Joey Mueller, executive director of Ohio-based Flag Football Fanatics, one of NFL Flag’s largest regional affiliates. But many who play flag football in his program move on to play tackle after fifth grade, he says.

Erich Lehmbeck, who runs a hauling company and lives in a Tucson, Ariz., suburb, takes his 11-year-old son, Blake, to flag football tournaments in cities as far away as Dallas.

At tournaments outside University of Phoenix Stadium, where the Arizona Cardinals play, “it’s almost a tailgate-type atmosphere,” he says. “People are barbecuing, setting up their canopies. Flag football’s gotten huge.”